The following public report is my second on JPMorgan Chase’s progress under its settlement with the federal government and five states concerning claims that Chase, Bear Stearns and Washington Mutual packaged and sold bad residential mortgage-backed securities to investors before the financial crisis (Chase RMBS Settlement). Specifically, this report contains Chase’s self-reported gross Consumer Relief and the credited equivalent that its internal review group (HRG) asserted to me on August 14, 2014. That August 14, 2014, HRG Assertion outlined the credited relief Chase claimed and the HRG validated through the second quarter of 2014.

I have not confirmed the gross dollars represented here because the settlement agreement requires me to validate Chase’s claimed credited equivalent, not gross amounts. My previous report detailed the settlement’s requirements and provided an update on Chase’s validated Consumer Relief credit claimed on a test sample of 100 loans as of March 31, 2014, which amounted to approximately $6.3 million in reported Consumer Relief credit. This report can be found here.

My team and I are in the process of validating the portion of the credit claimed in the HRG’s August 14, 2014, assertion, not including the 100 loan test sample described above. I will report on that additional validated credit before the end of the year. Chase will not receive credit under the settlement until I am satisfied it has met its obligations. Therefore, it would be premature to apply the $862 million in new relief contained in the August 14, 2014, HRG Assertion against Chase’s $4 billion obligation under the settlement.

Under the Chase RMBS Settlement, Chase is required to provide $4 billion in credited relief to consumers by December 31, 2017. As detailed in the Monitor’s previous report, Chase will receive credit for the following types of relief:

The different types of relief are credited in different ways and at different amounts, again as explained in the first report.

According to Chase’s HRG, 46,404 borrowers have received relief from the Chase RMBS Settlement in a gross principal amount of $7.6 billion. Below is a breakdown of the gross relief provided to borrowers as of June 30, 2014.

1One-dollar difference in addition due to rounding. 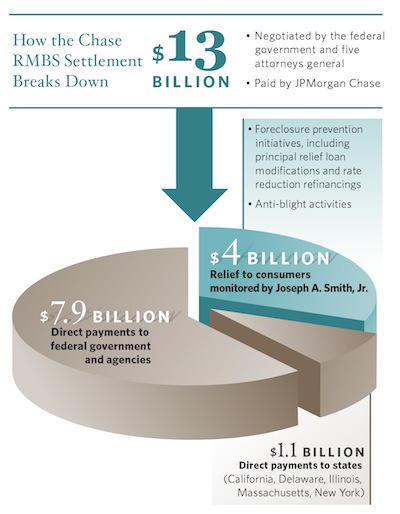 In its August 14, 2014, assertion, the HRG submitted to the Monitor the amount of Consumer Relief credit that Chase claimed to have earned and that the HRG had validated for the second quarter of 2014. According to the HRG, as of June 30, 2014, Chase had correctly claimed $868,616,504 of Consumer Relief credit. This includes the test sample of 100 loans the Monitor validated and reported to the public in July 2014.

My team and I are performing in-depth testing and review of Chase’s and the HRG’s work for its Consumer Relief for the second quarter of 2014. I will publicly report on these findings in my next quarterly report before the end of the year. That report will also include the assertion of Chase’s HRG for the third quarter of 2014.